We have been nominated for the International School Awards – again! This time with two initiatives from our fantastic students.

International School Awards is a prestigious competition. This year, schools from 62 different countries are participating with 264 different initiatives. Last year, it was young researchers in the group Think Tank who were nominated in the category  “Future Thinking”, and who represented SSHL at the awards ceremony in London in January.

Only 44 competition entities are chosen to go into the final, with three finalists in each category. The competition’s organizational team have announced that the breadth of the entries are exceptional this year, especially taking into account how difficult and challenging the  year 2020 has been for students and educators.

The winners are to be announced at the online award ceremony in London in January.

Something that characterizes both of these groups are a passionate commitment, great creativity, and the will to make a difference for both the environment and humanity:

The Kenya Project at SSHL is a small charity that has been run by students at SSHL since 2006, with the aim of providing children in the small village of Wagve, Kenya with an education. The student organization has had many successful projects in the small community. But, before all else, they have built a school, the Mama Norah Education Center, which they also currently fund.

Since the initiative started, both students, teachers, and other adults at SSHL have taken part in fundraising for Mama Norah. The Board currently consists of ten students. The project also has over 50 active members who participate in the different activities that are run by the Kenya Project at SSHL.

– This year has been hard, says Nina Plöen, who works as a boarding house supervisor at SSHL and who is the responsible adult for the Kenya Project. Because of the ongoing pandemic, we have had to cancel all of our fundraising events where we collect funds and recruit donors. This has created a lot of worry for us as we depend on gifts from others in order to keep our school in Wagve open.

The pandemic has also had an enormous effect on teachers and students at Mama Norah’s. Among other things, we have distributed lunchboxes to students who have not been able to eat during the times that the school has been temporarily closed. And, our seamstress has provided all of Wagve with facemasks to prevent the spread of Covid-19.

– I am incredibly proud and it is a bit surreal that our project is now getting broad international attention through ISA, says Nina.

Read more and follow The Kenya Project at www.mamanorah.com and facebook.com/mamanorahedu

Design and Technology Group or DTG, began as an extracurricular activity for a small group of students interested in technology. The organization has grown quickly and the students are currently working with a number of projects in which discarded technology is reused to create new and sustainable technology.

Georgios Savvas is a house tutor at SSHL and also the mentor for the group. He thinks that the nomination is a recognition and reward for the work that the students have put into DTG over the five years that the group has been at the school:

– The students should be the first to receive the congratulations because, despite their busy school schedule, they found the time to do something creative, innovative and to construct things far beyond what one would expect for secondary school students.

– Having created a 3D printer made almost entirely of scrap, the creation of a disinfection chamber for Covid-19, the reconstruction of useless computers, and much more, we continue this year with the creation of a standalone drone that will help reforestation, as well and creating a prototype of an energy-efficient and smart home.

Read more about the exciting projects in Design and Technology Group

We will cross our fingers for both of the entries and look forward to once again seeing our students at the awards ceremony that will be broadcasted live from London in January! 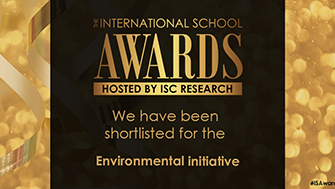