You get into boarding life quickly and make many friends

For this interview, we did not have to go far to find a person with an exciting story. Carl Månsson, who lives at the boarding school and will soon take the student, will study at a university in the USA after the summer.

How come you chose SSHL?

I have lived in Switzerland for a long time, from the age of eight until I started high school. After I did my GCSEs (General Certificate of Secondary Education) there was a natural interruption in schooling and then I chose to reconnect to Sweden and continue the rest of my education in Swedish. In Switzerland I went to a boarding school but was a day student, so I wanted to try to be a boarding student.

What do you think about SSHL?

There are so many choices. SSHL conducts activities outside school hours as well, for example the sports exchanges with NECIS (Northwest European Council of International Schools) and SIPSI (Swedish Boarding and Private Schools Sports Organization) and so are the various associations at the school. You can choose to what extent you want to take part in what is offered, so you can say that SSHL is a school that is adapted to all kinds of students.

A large part of what makes SSHL so special is the boarding houses and the feeling of home that shines through in different contexts, for example in the home series, and since the homes are small, everyone knows each other. The boarding school here is run in an efficient way so that it is easy to make both Swedish and international friends. It is a close community.

You are graduating on Wednesday, how does it feel?

It feels exciting, there has been quite a lot in the last year with national exams and applications to universities. In a way, it feels nice to move on, but at the same time sad to leave a very nice house.

What are you going to do after school?

I’ll be studying for a four-year program at Yale University in New Haven, Connecticut, USA. The semester begins on August 22. The reason I chose the USA was mainly because I do not really know exactly what I want to do later in life. I want it to be something in science, but I constantly alter between, on the one hand, physics and mathematics, and, on the other hand, chemistry and biology. In the US, education is fairly open for the first two years and then narrows towards the end.

How to get to Yale?

It’s a tough admissions process. In the USA, the grades are not as important as in Sweden, but greater emphasis is placed on SATs (Scholastic Assessment Test), which is an equivalent to the Swedish university entrance test. Then there are subject tests where you can choose two or three subjects and take entrance exams there as well. Then there are interviews, you should have two letters of recommendation from teachers and create an account on a website called the Common Application where you write essays on various issues. Among other things, they want to see how you write, but also what kind of person you are, what your interests are outside of school and what you like to do and how you engage in your free time in the activities on offer.

What would you like to say to those who are considering SSHL?
They will thrive well. SSHL is a versatile school that caters to many personalities, you get into boarding life quickly and make many friends! 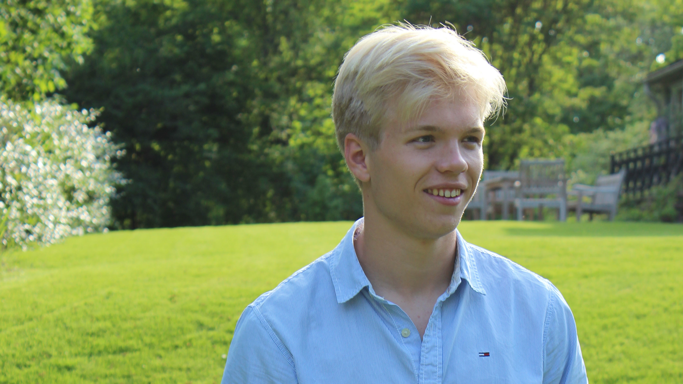